Most company’s have work flow processes where a piece of work is passed from department to department step by step until its marked as completed. Some processes are well defined, ridged and are simple to map out and others take on a more random path depending on their unique requirements, sometimes looping around the same department several times before it can be marked complete. Ideally I would have loved to work with a defined process where I could map data onto clear info-graphs (see below), perhaps the project will lead there, but for now I’m working with dynamic data.

Each chart was visualized with example data to quickly see how they performed.

Chord diagram was difficult to analysis so the decision was made to use the Network Chart as the starting point although I needed to do more with it, I wanted the process to flow left to right from the open to closed action with all the work nodes in the middle. Off the shelf network charts used force to determine where a node would be positioned, this would be random and as such you couldn’t see the left to right flow as you were always looking for those start end end point. For this to work I decided to create a bespoke extension using D3.

First I used a basic Network Chart from Holtz Yan (https://www.d3-graph-gallery.com/graph/network_basic.html) to give me the basic building blocks. One issue which I didn’t notice was it used version 3 D3, the Network commands for V5 are different although as I was too far into the project before I realized I continued with version 3… This of course may cause a problem in the future if more requirements are added but for now its fine.

Next I started working through my requirements… I created a JSON file which held x and y coordinates of all the nodes (plus additional data), turned off the network force settings to lock them in place.

I changed the paths so they linked between the nodes and updated the code to allow the nodes to be moved by the user but still remain in their new position. For this turned back on the tick. removed the force and added this code to lock the position of the node.

Paths were a challenge as you can see below. I didn’t want them to go over the node but I needed to see the arrow head, sending them to the back (rendering them first) would solve the first problem but would then hide the arrow head…

I resolved issue with two paths. The first goes from the center of the source to target node, rendered first so its layered behind the node. The second path is invisible and only goes half the distance, the arrow is placed at the end of that path so appears to be in the middle of the first…. 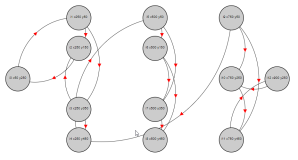 Up until now the node name was just giving me back x and y data so I could see them updating. Changing the label to the node name became as big issue to resolve because of text wrapping. Normally that’s quite simple but in D3 most solutions offered by the various examples consisted of a complex function which looped through the data, I gave up in the end and truncated the string before returning to the problem later to resolve it with a different method.
What I had to do was create a new SVG foreign object over the node and add the text to that using a HTML <P> tag which allowed me to easily style it using a class.
nodeposs = svg.append(“g”).selectAll(“#fo”)
Next was to thicken and darken the path lines to show the volume. 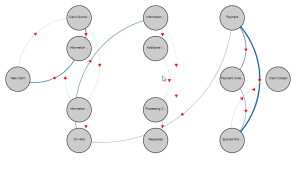 I wanted to use colour to display more information. Firstly I thought the some nodes maybe different actions but belong to the same department. Secondly the arrow could indicate if there was a blockage in the pipeline depending on the SLA of that process. Finally, for even more information for the user,  I added pop ups for the nodes and RAG arrows to display actual values.

Code for this version can be found here https://github.com/RichardPearce60/NetworkChart-ProccessFlow-D3, I’d welcome any suggestions people have optimizing the code.

Again any further ideas for development is very welcome.

About the Author: Richard Pearce

Richard has been working within Business Intelligence for over 20 years. He has managed teams of analysts in a number of large organisations across finance, healthcare, service, and retail. He has worked extensively with QlikView and Qlik Sense. He is a Director of the QlikDevGroup, a meetup captain, a Qlik Luminary and speaks at many Qlik events around the world

©2019 – Richard Pearce
Please contact me if you’re concerned about any accidental infringement for immediate removal.